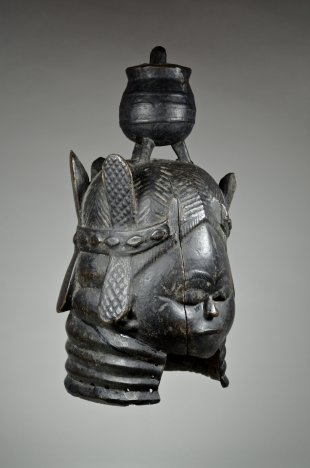 Bundu mask from the Sande Society 2

This wooden mask is associated with a secret women's society which exists in parts of West Africa. It would have been worn, with a black raffia costume, at important civic events such as the visit of an important dignitary or the coronation or funeral of an important chief. It is particularly associated with girls' initiation ceremonies and is unique in Africa in being owned and worn, if not made, by women. Sande is a women's society found in Liberia, Sierra Leone and Guinea. It is traditionally responsible for initiating girls into adulthood and more generally champions women's social and political interests. Men have a similar society called Poro. In the past, female initiates were taken into a specially-cleared area of forest outside the town or village where they would spend several weeks or months being tutored in domestic skills, farming, sexual matters, dancing and medicine by female elders. They would also be tutored in the secrets of the women's society and taught its songs and dances. When they later emerged, in fresh clothing and with new names signifying their new adult status, the young women would be accompanied by the masked dancer. The mask and costume are called Sowo after the supernatural entity which represents Sande society. The carved helmet mask is symbolic and its style distinctive. The female spirit depicted by the mask has small, delicate features, a wide expanse of forehead and elaborate hairstyle. These reflect popular Sande attributes. The downcast eyes and closed mouth, for example, represent modesty and aloofness, considered desirable female traits amongst the Sande. The spirit's neck is marked with rings. Some researchers have seen these as rolls of flesh - and thus evidence of the spirit's health and beauty - but others have suggested that the rolls echo the form of the chrysalis of certain butterflies. In this way, the transformation of caterpillar into butterfly, girl into woman is suggested. The neck rings are also interpreted by some Sande members as the ripples of water that radiate from the mask when it appears from the water, for the spirit is believed to appear to humans from bodies of water.

Sande masks are usually made of lightweight bombax wood. The thickness of the wood is important as the mask needs to be comfortable to wear. Traditionally, the wood was smoothed down with the rough leaves of the ficus tree before being dyed black. A rich glossy surface is achieved by rubbing the mask with palm oil or shoe polish. The costume worn with the mask is made of layers of raffia fibres that have also been dyed black. These are attached to the lower portion of the neck as well as to a black cloth shirt or gown worn over the body. The sleeves are sewn shut, and long stockings or men's shoes are worn. No part of the body is left exposed for revealing the body would expose the human beneath and would also allow the spirit to enter the human dancer rather than the mask.

ADD TO YOUR FAVORITE